If you’re looking to gain experience in the Life Sciences sector there has never been a better time to consider contracting in Ireland.

This graphic shows some of the recent job announcements throughout Ireland.

Irish (Gaeilge) is recognised as the first official language of the Republic of Ireland. However, the majority of the population speak English (the second official language) as their first language.

If you want to work in Ireland our clients require a high standard of English both written and oral.

The main airports in Ireland are located in Dublin and Cork. Dublin Airport is by far the busiest, with the largest timetable of global flights connecting with over 180 destinations. More information available at: dub.fltmaps.com

There are also airports in Shannon, Knock and Kerry with limited flight options.

If you’re thinking of moving to Ireland it’s important you consider how often you plan to travel home. Research the frequency, duration and estimated cost of flights before you make the move!

TIP: All airports in Ireland service the UK so you also have the option of flying to one of London’s airports and booking a connecting flight which can sometimes be easier!

Dublin being a capital has the largest network of transport systems including the DART and the LUAS.

Note public transport in Ireland is more expensive than the European average.

Tip: If you are travelling frequently by bus/public transport it is a good idea to buy a LEAP card where you can save approx. 20% on bus fares and no need to carry cash. For further information visit: www.leapcard.ie 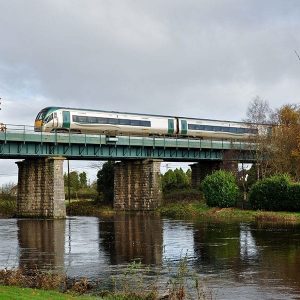 Travelling to and from work

Most companies in the Life Sciences sector in Ireland are based around five cities – Dublin, Cork, Limerick, Galway and Waterford. Most facilities can be reached by public transport however the majority of our consultants travel to work by car. This tends to be the most convenient method of transport, as once you move outside the city centre bus times can be less frequent and the high levels of rainfall don’t make for a pleasant wait! If you want to make the most of your time in Ireland and see what the country has to offer, it is a good idea to consider getting a car.

Car insurance in Ireland has increased rapidly in the past few years and is above the European average.

Different companies will provide you with different quotes so make sure you do your research before agreeing to a policy!

Note: You can bring your car to Ireland as a tourist for 6 months but for any longer periods of time

You will need to change your registration plate to an Irish one for a cost. Full details available at: www.citizensinformation.ie

If the above doesn’t appeal, you always have the option to cycle! However there are very few dedicated cycle lanes in Ireland so you will be cycling in the traffic most of the time and in Ireland and it rains a lot! If this doesn’t faze you LSC operate a Bike to Work scheme to save you up to 51% (by salary deduction) off the retail price of bike and equipment of up to €1,000.

Finding accommodation in Ireland can be the most challenging issue when relocating.

Rental prices have increased significantly in the past few years as demand increases and supply can’t keep up.  Here is an infographic showing the average monthly cost of rental accommodation nationwide.

The following are the most popular websites to search for rental accommodation in Ireland:

It is a must to research accommodation prior to coming to Ireland to see what is available in the area you plan to move to. More often than not there will be multiple people viewing one property so you will need to be proactive and keep your options open. Unlike a lot of European rentals, the majority of rental accommodation in Ireland is already furnished. Most rental properties are not pet friendly so if you’re bringing a pet keep this in mind! You will also need to pay at least one months deposit in advance once you secure a property.

Note: Landlords/letting agents require a reference of employment when renting an apartment/house in Ireland.  LSC are more than happy to organise this for all our consultants. 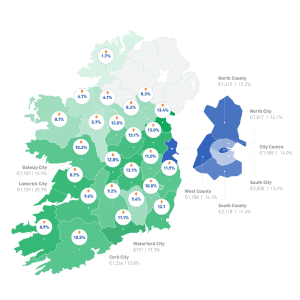 Cost of living in Ireland

Here is some guidance on the average cost of living in Ireland. You’ll also find the option to compare prices with your home country/city! Visit: www.numbeo.com

If you decide to take a contract in Ireland you’ll need to set up an Irish Bank Account for payment.

If you haven’t secured an address in Ireland you can open a bank account as a non- resident. Many banks will accept a utility bill, bank statement or government correspondence with your home country address. However, some banks will require non-residents to provide two proof of address, a character reference and access to your financial history in your home country.

Tip: It’s best to select a branch near to where you will be living in Ireland as you may need to call in person!

PPS Numbers (Personal Public Service Number) are required for all workers in Ireland.  This number is unique to you and is required for your Payroll to be processed. Your PPS Number will be assigned with tax credits which will be applied based on your own personal circumstances.

The process of getting a PPS number is relatively easy however you will first need to secure a contract, and be resident in Ireland before application can begin.

To get a PPS number, you will need to:

Visit www.MyWelfare.ie to make a booking.

The work culture in Ireland

Ireland is known for its social balance, equality, educated workforce and transparency. As of 2017, Ireland has the second highest minimum wage in Europe and has an unemployment rate of 6.1%.

The typical working week in Ireland is 39 hours from Monday to Friday and office hours are usually between 08:00 and 17:00.

Note: If you are relocating with a family and need to factor in childcare during working hours this will be an additional cost to consider. Ireland currently ranks as one of the most expensive country’s in Europe for the price of childcare. E.G – Average €150 per week per child in Dublin.